Getting to know our CWGF volunteers

We caught up with some of our amazing volunteers to get a feel of why they’ve decided to get involved in our work.

We were lucky enough to be supported by two volunteers, Rob Bradshaw and Emrys Jones, at a War Graves Week pop-up event in Peterborough.

Rob and Emrys are supporters of the work we do at the Foundation as well as the Commonwealth War Graves Commission. We sat down with the pair to learn a little bit about them and why they volunteer with us. 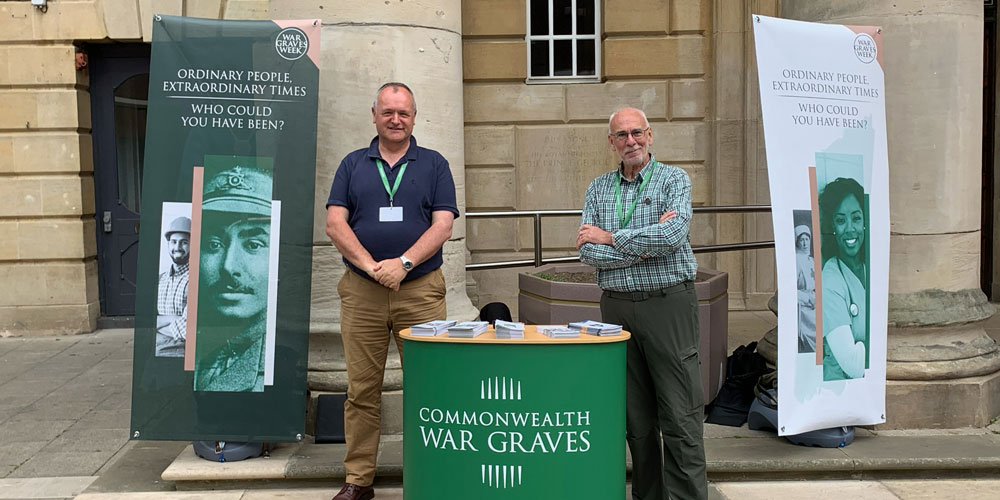 A quick word with Rob Bradshaw

“I am an Eyes On Hands On Volunteer covering five sites across North East Northamptonshire and MacRobert Trust Speaker,” Rob, a CWGF member since 2020, said. “I am also part of the RAF Air Cadets/CWGC Project Team through my RAF Air Cadet involvement.”

Rob’s cadet work, something he has been doing since 1994, helped draw him towards the Commission and the Foundation, and ultimately to volunteering with us.

“My RAF Air Cadet involvement has been taking me to Nijmegen every year, and as part of this, I started to deliver a briefing at various CWGC sites in the area, giving an insight into the casualties to air cadets,” Rob explained. “Then Covid came along, which allowed me to continue researching military history. This brought me to the Commission.”

“I volunteer as it is helping everyone to remember the fallen,” Rob said. “It’s keeping their memory alive for their family and for generations to come.”

Joining one of our local projects, such as Eyes On, Hands On, lets our volunteers explore their local area and help to maintain our war graves.

Project participants often come away with a newfound appreciation for the men and women commemorated in their neighbourhood, as well as new stories to tell. Then it’s all about spreading that message.

Street pop-ups, like those that Rob and Emrys attended, are one way we spread awareness of the work we do.

How did Rob feel about volunteering at this year’s Peterborough pop-up?

“A great concept, good to see and talk to a good breadth of the general public, from those who knew nothing, which allowed us to educate, to those who were aware and just wanted to chat.
The pop-up event was great.”

Thinking of volunteering yourself? let Rob’s words inspire you: “Give it a go! You’ll lose nothing if you do.

“Learn about your local area but also use any holidays to find out what is in your vicinity. It is like a bug, once you start, you’ll want to know more.”

Emrys Jones is another of our long-serving volunteers.

“I volunteer within the Eastern Region of the Eyes On, Hands On project joining at the launch of the pilot exercise,” Emrys told us. “For 20 years I worked as a battlefield guide for a leading UK company in my ‘downtime’. I saw the volunteering opportunity as both a way of continuing my interests and repaying the help and support I had received from the CWGC. I’m doing my bit to ensure we will remember them.”

Speaking of his WGW 2022 pop-up experience, Emrys said: “That was interesting because of the diversity of people who stopped by for a chat – a diversity representative of Peterborough’s residents. Some people had heard of the Commission and were interested to hear about the various programmes, others surprisingly knew nothing at all about us. Even more surprising were those of a senior generation who had not heard of the CWGC.”

Any hints on how to get started, Emrys?

“Do it. If you have any doubts ask, or better still find a volunteer!”

Want to join in with Rob, Emrys, and thousands of other likeminded volunteers across the UK?

There are plenty of options for history lovers looking to give back to their local communities with us here at the CWGF, including:

If you’ve been inspired by the above and would like to volunteer with us, please head over to the Volunteer page. We look forward to hearing from you!