An Evening at Brookwood 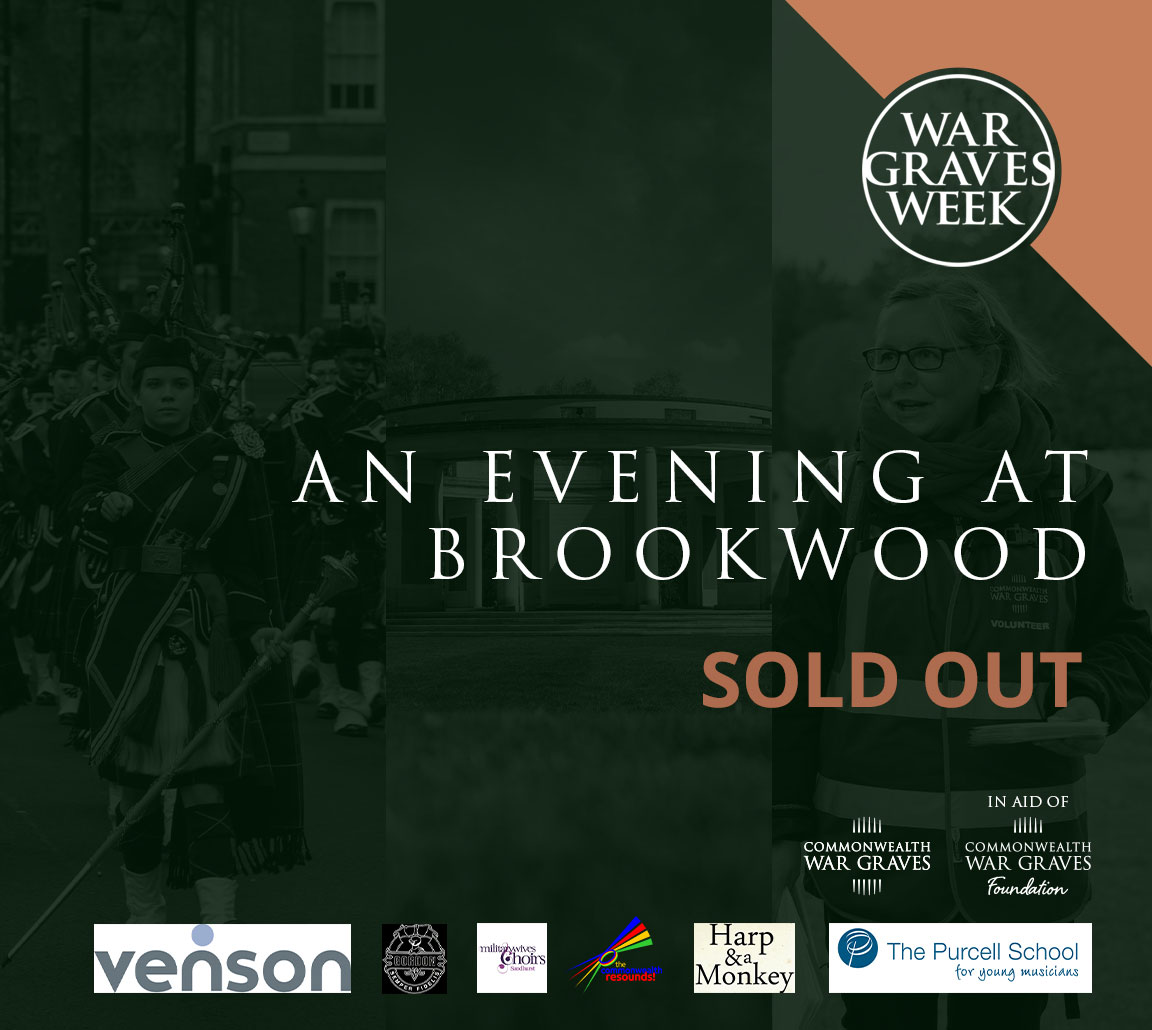 We’d like to say a very heartfelt thank you to everyone who has bought An Evening at Brookwood ticket. All the proceeds from the event will go directly back into the Foundation.

Through purchasing your ticket and coming along, you’re helping support the work we do at the Foundation keeping the stories of our war dead alive.

We look forward to seeing you there where we’ll be exploring the power of music in remembrance with our programme of exciting musical acts.

Event details, including the programme, can be found below.

An Evening at Brookwood Programme

See below for a breakdown of times and acts at this year's magical Evening at Brookwood. 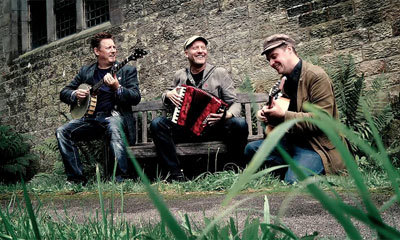 The outfit’s work has been described as “bold and brilliant” by the likes of The Observer, “fantastic” and “fascinating” by Mark Radcliffe on BBC Radio 2, “inventive” by Mojo, “excellent” by The Guardian, and “unique” by folk legend Mike Harding.

The multi-instrumentalists have released four acclaimed albums (including an internationally praised 'War Stories' collection) and are regulars on the national concert circuit, guaranteeing poignancy, humour and great audience rapport at their live performances.

The versatile trio have been commissioned to undertake bespoke song-writing, soundtrack, film and public/community art projects for leading universities, museums and TV companies, as well as bodies like Arts Council England, The Heritage Lottery, The Department of Sport, Media and Culture, the Western Front Association, and many more. They were the 'house band' for a number of national events marking key dates during the centenary of the First World War.

Families of service personnel move around frequently and it can often be tough to put down roots or make new friends, particularly when loved ones are away for long periods of time. Research shows that singing in a choir can help to alleviate stress and can contribute to an improvement in mental health. The Military Wives Choirs, therefore, have a vital role to play by bringing women in the military community together to sing, share and support.

Sandhurst Wives Military Choir has a particularly strong link to the armed forces, being located in the Royal Military Academy Sandhurst. We are delighted to host them at this year's Evening at Brookwood. 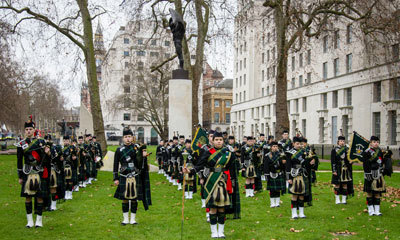 Gordon’s School is the National Memorial to British war hero, philanthropist and martyr, Major-General Charles George Gordon (1833-1885), and was founded in 1885 where it began existence as ‘Gordon Boys’ Home’ for necessitous boys. Queen Victoria, as the first of an unbroken line of sovereign patrons, took the lead in demanding a fitting National Memorial be created in Gordon’s honour; an interest that has been maintained to this day.

From inception, the Gordon Boys’ Home in Dover had a Pipe Band, tutored by the Pipe Major of the Seaforth Highlanders, when the regiment was posted to Dover Castle. Sadly, in 1941, the Home in Dover was bombed and it was at this time that the Pipe Band were relocated to the Home in West End, then known as The Gordon Boys’  School. In 1941, the Band consisted of six boys and has since grown over the last 80 years to a Band of 50 strong, establishing a lasting tradition within the School.

Gordon’s School Pipes & Drums has been fortunate to perform in the presence of Her Majesty The Queen in Westminster Abbey in 2014 for An Observance of the Commonwealth, as well as performing in the Lord Mayor’s Show, at Earl’s Court and Windsor Castle, to name but a few prestigious occasions. Every year, the Pipes and Drums lead the annual School Parade through Whitehall to the statue of General Gordon in Embankment Gardens for a short memorial service, which is always a highlight of the Band’s calendar.

As the Band celebrates its 80th anniversary this academic year, we hope that it will be able to return to Menin Gate, Ypres, to take part in the Last Post Association Service and in August 2022, take part in the World Pipe Band Championships in Glasgow Green for the first time in the Band’s history.

The Purcell School for Young Musicians 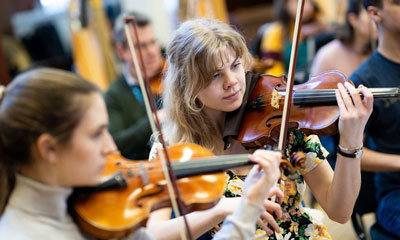 The Purcell School is Britain’s oldest music school. Situated on the outskirts of London in Bushey, Hertfordshire, the co-educational boarding and day school is home to around 180 musically talented young people, all of whom are passionate about fulfilling their talent.

Its aim is to provide these young musicians, of remarkable ability and promise from all backgrounds, with the best possible teaching and environment in which to fulfil their potential. Purcell School delivers the very highest world-class musical instruction and holds the UNESCO Mozart Gold Medal in recognition of the School’s unique contribution to music, education and international culture.

The School affords ideal opportunities for practising, performing and developing musicianship, while also providing a balanced academic education which helps to prepare Purcell students for life-long careers as musicians.

Ensemble 1 - EUROPE 'We will remember them' by Maddie Melville Smith

We are delighted to be collaborating with our musical partners The Commonwealth Resounds to bring you this evening's entertainment.

The Commonwealth Resounds is an officially accredited Commonwealth musical organisation. Established in 2005, its mission is to connect musical cultures, and to promote initiatives and partnerships in Commonwealth countries. We have a special focus on music education and composition.

An Evening at Brookwood - FAQs

Risk assessments are available to view.

Due to the lack of parking at Brookwood, we regret we can only offer accessible parking onsite at the Cemetery. If you require the use of accessible parking please drive to the main gates of the CWGC Brookwood Military Cemetery, off ‘Dawney Hill’ and along the Road called ‘Brookwood Cemetery’, as shown below and staff will be there to guide you to the very limited onsite parking.

Other parking can be found at Brookwood train station – Brookwood Cemetery is accessible through the subway from Platform 2 or the staircase from platform 1, as shown in the diagram below. CWGC representatives will be around the site to point people in the right direction. 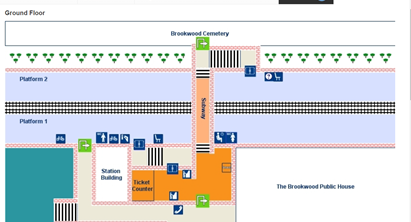 Please bring your own picnic, there will be a hot drink and cake stand on site.

The Coffee Can Company

This event is in the spirit of an outdoor cinema event and therefore we encourage you to bring your own picnic blankets and camping chairs. No gazebos please.

This is an all-weather outdoor event and therefore we encourage guests to come dressed and prepared for the very changeable British weather.

There will be portaloos on site including accessible options.

While we are allowing the consumption of alcohol on the premises, we ask that this is consumed in moderation and only by adults.

Well behaved dogs kept on a lead welcome. All dog waste to be cleared up by the owner and taken home.

All litter to please be taken back home.

For example, if you act aggressively towards us and our staff and/or volunteers or other members of the public, or you appear to be under the influence of alcohol or drugs, we may not allow you to enter the event, or if you are already at the event, we may require you to leave.